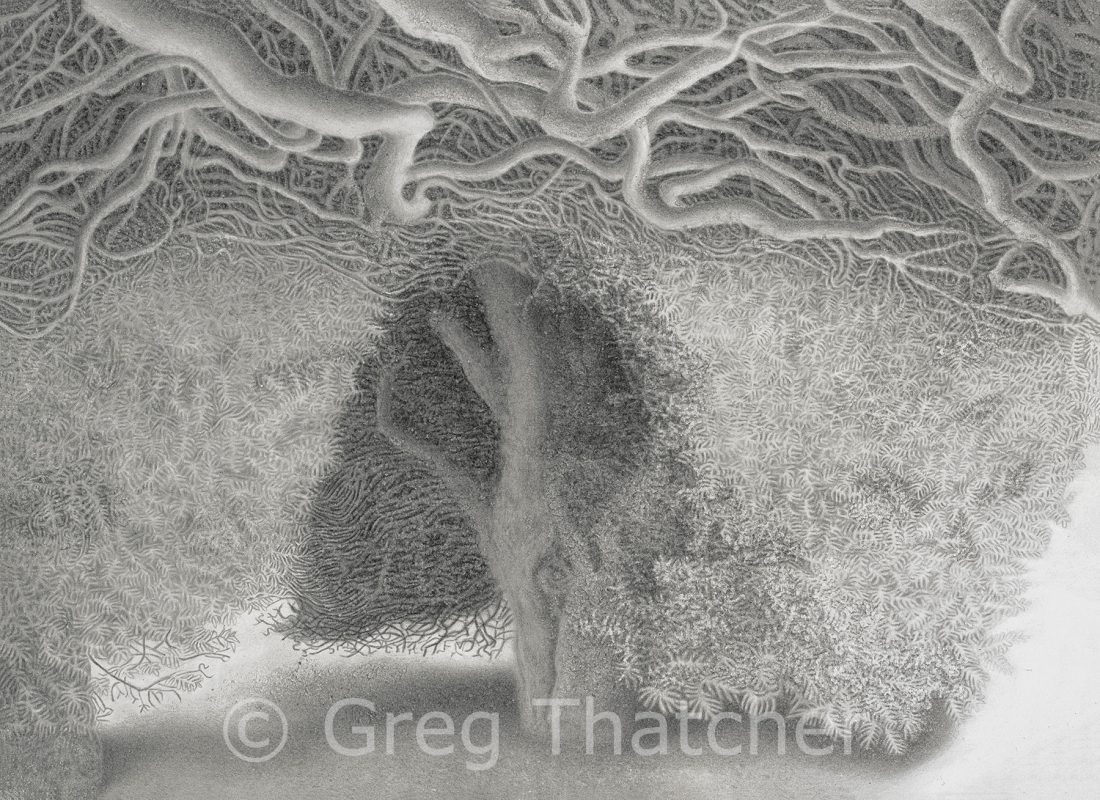 People will be able to explore the complexity of nature when a new exhibit, entitled “Memory of Place,” opens at the Blanden Memorial Art Museum this month.

An opening reception for the exhibit will be from 3 to 5 p.m. Saturday at the museum, 920 Third Ave. S., and Iowa artist Greg Thatcher said he plans to be on hand to discuss the collection of drawings and prints depicting yew trees.

His fascination with the trees began two decades ago when after working on a series of local landscapes, the art teacher from Fairfield decided to venture farther afield.

“I felt like I was repeating myself and wanted to do something different,” he said.

So, in 1991, Thatcher applied for a grant that enabled him to travel to a print making shop in England. While there, he spotted a travel brochure for the churchyard of the Parish Church of Saint Mary in Painswick, Gloucestershire, a site known for its intriguing yew trees.

“Since that time, it’s been a love affair,” he said. “I’ve been back probably 19 or 20 times. I feel an incredible connection with the community and with the trees there.”

His body of work now includes more than 250 paintings, drawings and prints. The most recent drawing was completed in late December and is titled “yew trees # 118.” The pencil on paper piece took him 675 hours during a four year period to create. In that time, he made four trips to England to study the tree it depicts.

“I want to be honest and precise,” Thatcher said, “and that just takes time. I try to be absolutely precise, nothing is made up.”

Adding to the challenge is the intricate and layered structure of the trees and their branches.

“When you sit there and study something closely, you become very familiar with it and with its changes,” he said.

“As I continued to work with the trees, I found more and more information to deal with. I had to re-teach myself to draw, and you have to be there in person, studying the tree. A photograph is just too flat.”

Thatcher’s works are characterized as “plein air,” a French term that means each drawing is done on location. It’s a required approach, Thatcher said, due to the labyrinth-like patterns and incredible shapes created by the branches of the more than 100 trees that intertwine and arch over the churchyard pathways.

“It’s almost like a wonderland,” he said. “The churchyard belongs to the trees, the trees do not belong to the church yard. In sections and certain pathways, you have to duck down. I love that about it. The drawings are a way for the trees to communicate and for me to communicate what the trees make me feel.”

The yew trees that have so engaged Thatcher are relatively young, he said. He estimates they are nearly 400 years old and were likely planted in the Middle Ages.

According to Woodland Trust, a nonprofit conservation organization based in the United Kingdom, yews generally easily reach the age range of 400 to 600 years.

In fact, 10 yew trees have been identified in Britain that are believed to predate the 10th century. Such longevity is likely the reason yew trees are often used as symbols of immortality, conservationists said.

Additionally, yew trees are often associated with churchyards, like the one Thatcher returns to regularly for his drawings.

Officials said while they are unsure how this relationship came to be, it has been suggested that in the past yew trees were planted on the graves of plague victims to protect and purify the dead.